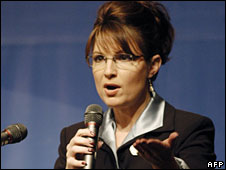 Republican Vice-Presidential Candidate Sarah Palin is one of the most polarizing figures to come along in American politics in years.

But whether you love her or hate her, you have to admit this, she shows the power of well-delivered speech. Â Two weeks ago, no one had heard of her. When she was nominated by John McCain as his running mate, she drew interest.Â

But when she stood in front of the nation and delivered a speech (and she delivered it extremely well), she suddenly became a national leader worth either revering or hating.Â

If you want people to notice you and you’re ideas, stand up and give a speech. Few things can transform you into a leader quicker.