We can learn about connecting with audiences from this month’s controversy over a proposed statue of Dr. Martin Luther King Jr. Â The commission overseeing the creation of a Washington D.C. memorial of Dr. Martin Luther King Jr. recently called for revisions of a proposed statue of Dr. King.Â The panel said the statue looked “confrontational” and reflected a “genre of political sculpture that has recently been pulled down in other countries.” Â

In other words, they think it makes our greatest Civil Rights leader resemble Saddam Hussein.

The proposed statue is particularly ironic in light of Dr. King’s famous ability to connect with audiences. Â He was certainly one of our nation’s greatest and most moving speakers. Â Yet in the proposed statue, he is standing in a classic closed position. If we saw one of our clients standing like that in a workshop, we would urge them to open up and connect.

In fact, we’d urge them to assume a position more like the stance portrayed in the memorial statue of Dr. King displayed at the University of Texas at Austin as seen below. There Dr. King is shown in a more open stance, reaching out and connecting with an audience.

But that’s where the public speaking lesson ends.Â

Compare the Saddam Hussein statue below with the above statues.Â 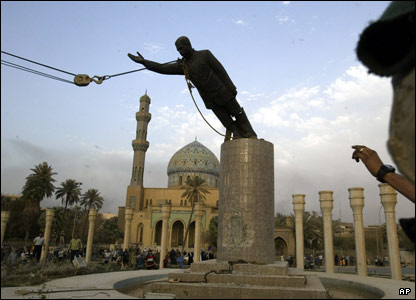 I’m no art critic. And I’m certainly no political scientist. Â But it does look like Saddam, when he commissioned his statue, was trying to make himself look like the kind of leader that reaches out and connects with audiences.